Serena Williams has revealed she is 20-weeks pregnant with her first child by sharing a close up of her growing bump on Snapchat.

The world No 2 has not played since the Australian Open in January where she beat sister Venus 6-4, 6-4 for her 23rd grand slam title. Last month the American pulled out of Indian Wells and Miami Open citing a knee injury.

The tennis superstar will not play again in 2017 but will return to the tour in 2018, her spokeswoman said.

Kelly Bush Novak told Reuters that Williams “definitely” would not be able to play again this year but “looks forward to returning in 2018.” 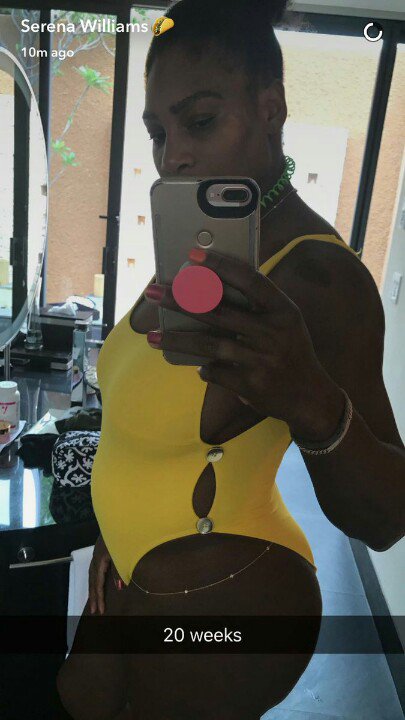 BREAKING: Serena Williams is pregnant. Makes sense after she pulled out of so many tournaments. Won’t be back till 2018. Maybe never?!

Williams, who will return to the No 1 ranking in the world next week, deleted the selfie shortly after posting it. She waited more than six hours to make any public comment, stoking furious debate among tennis fans about whether or not she was joking.

Williams announced in December that she was engaged to Alexis Ohanian, a co-founder of Reddit, the social messaging site.

Williams will be 36 in September and has achieved every milestone possible during an illustrious career.

So happy for @serenawilliams ! She deserves this. Whether or not she steps back on court again, she made history in so so many ways

Aside from winning Wimbledon and the Australian Open seven times she has also been world No 1 for 316 weeks in total which ranks her third in the Open era.

Some other supporters, meanwhile, were quick to work out that Williams was pregnant during her 23rd slam triumph in Melbourne in January.

Others teased that Williams announced the news on the day of Maria Sharapova’s 30th birthday. The Russian is currently preparing for her return from a drugs ban at Stuttgart next week.